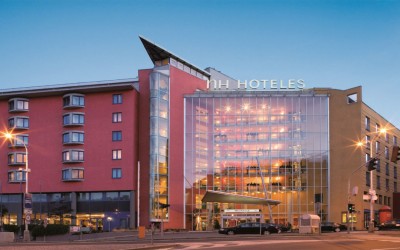 Against the backdrop of the international tourism trade fair hosted in Spain - FITUR -, the Chief Executive Officer of NH Hotel Group, Ramón Aragonés, has taken stock of the events of the past year and the initiatives that have put the Group in a position to present its best results ever. In addition to emphasising the harmony between the NH Hotel Group and Minor Hotels teams and the joint opportunities they are exploring together on an expedited basis, NH's CEO anticipated strong results in 2019.

The Company has announced that it expects to surpass its guidance for EBITDA(1) of €260 million in 2018. Ahead of the results presentation scheduled for February, Ramón Aragonés said that the Company had performed even better than expected during the second half of the year. That performance was underpinned by strong showings in the main European cities, with the recovery in Barcelona standing out.

NH Hotel Group's CEO also highlighted the drivers that are helping the Company to deliver all of the profit guidance committed to: efficient operational management and a successful deleveraging strategy that has brought on results above the initial objective are enabling it to make the most of the improved business momentum.

Ramón Aragonés pointed out some of the initiatives undertaken during the year, such as the reinforced brand positioning of NH Collection, which currently accounts for 22% of all Group rooms, and the enhanced guest experience. On this last point he noted the launch of FASTPASS, a combination of three innovative services - Check-in Online, Choose Your Room and Check-out Online - that give guests total control over their stays. In fact, NH Hotel Group is the first European chain to offer these three services simultaneously.

In addition to efficient revenue management, underpinned by improved quality, Aragonés highlighted the optimal asset rotation strategy executed last year, specifically underlining the sale-and-leaseback agreement of the building that houses the NH Collection Barbizon Palace in Amsterdam and the more than 2,300 rooms opened or added to the pipeline during the year. In terms of openings, he flagged the NH Collection Gran Vía in Madrid and the two new hotels inaugurated in Marseille under the NH Collection and nhow brands. He also recalled that the pipeline currently encompasses 26 hotels with almost 5,000 new rooms. Within this pipeline, he explained the Group's strategic commitment to the nhow brand, with seven iconic hotels under development in the cities of London, Amsterdam, Brussels, Frankfurt, Rome, Lima and Santiago de Chile, which are scheduled to open their rooms in the coming years.

Elsewhere, Ramón Aragonés underlined the fact that the Company had ended 2018 in strong financial health thanks to its deleveraging effort, a priority during the last two years. That effort means that having started with gross borrowings of nearly €900 million at the end of 2016, the Company has achieved its target of having a net debt-to-EBITDA ratio of under 1x by the end of 2018.

After acquiring 94.1% of NH Hotel Group during the last quarter of 2018, Minor International and the Spanish hotel chain have begun to explore ways to unlock value together in the years to come. The first initiative, announced during the trade fair FITUR, has been the presentation of the upcoming integration of the hotel brands of both companies under a single corporate umbrella with  presence in over 50 countries worldwide. And so, a portfolio of over 500 hotels has been articulated around eight brands - NH Hotels, NH Collection, nhow, Tivoli, Anantara, Avani, Elewana and Oaks - comprising a broad and diverse range of hotel propositions connected to the needs and desires of today's global travellers.

Ramón Aragonés singled out Minor International's confidence in NH Hotel Group's entire management team and the enthusiasm shared by both teams over the opportunity to create a leading, global hotel platform with a presence on six continents. “The complementary nature of the two hotel portfolios and the benchmark positioning of their various brands will allow us to grow and compete on a firmer footing and to create added value for our customer bases all around the world”, added NH's CEO.

Both groups' teams are already working together on several lines of initiative. Taking advantage of their joint broad universe of brands, they are analysing hotel by hotel the potential  rebranding to premium brands of some of the assets in Europe, where there is room for boosting higher margins under new trademarks. In tandem, the two companies are working on projects for unlocking economies of scale in the sales and supplier platforms.

Thanks to Minor Hotels' leadership position in its home markets, NH Hotel Group is already benefitting from certain cross-selling opportunities via access to the former's Asian customer base; the growth potential is significant as Asian guests currently represent 1% of NH's guest base. In parallel, they are both working on structuring the use and operation of the two groups' brands in markets other than their natural ones, an initiative expected to speed up their expansion worldwide.

One of the most advanced joint projects relates to the transfer to NH Hotel Group of the operations of a portfolio of 15 Minor Hotels in Portugal and Brazil, which is expected to materialise in the near term. As a result, NH Hotel Group will be operating 17 hotels in Portugal (13 Minor Hotels establishments, three NH Hotel Group establishments already open and another in the pipeline), establishing a leading position in this market with a presence in Lisbon, Porto, Coímbra, Sintra, Evora and the Algarve. And in Brazil the two companies will join forces with three hotels located in Bahia, Sao Paolo and Curitiba.

The better than forecast performance and the initiatives executed in 2018, along with others currently being rolled out in 2019, notably the investment in repositioning certain key assets in cities such as New York, Amsterdam, Rome and Munich, enable NH Hotel Group to reiterate its guidance for EBITDA(1) of €285 million in 2019.

Indeed, the Group's strong financial position has enabled it to identify additional opportunities for repositioning assets at attractive returns that are expected to materialise in 2019 and 2020 in leading European cities, including Rome, Amsterdam, Milan, Brussels and Luxemburg.

NH Hotel Group  is a consolidated multinational player and a leading urban hotel operator in Europe and America, where it operates over 350 hotels. Since 2019, the Company works with Minor Hotels in the integration of their hotel brands under a single corporate umbrella with presence in over 50 countries worldwide. Together, both Groups have a portfolio of over 500 hotels articulated around eight brands: NH Hotels, NH Collection, nhow, Tivoli, Anantara, Avani, Elewana and Oaks - that comprise a broad and diverse range of hotel propositions connected to the needs and desires of today's global travellers.