DEUTSCHE HOSPITALITY SUPPORTS THE CONSTRUCTION OF A SCHOOL IN NIGERIA← Back 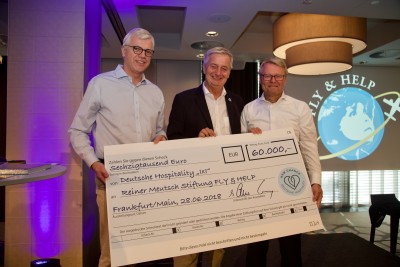 The school will be able to accommodate up to 300 pupils, and the company has already handed over a cheque for €60,000 to the Reiner Meutsch “FLY & HELP” Foundation to pay for the works. The money has been raised via the “Deutsche Hospitality 1x1” scheme, which donates €1 to charitable causes for every booking made via the Steigenberger and IntercityHotel websites. Only recently, the same pot was used to finance the commissioning of a drinking water treatment plant in the Egyptian desert. The new build has been designed to extend over an area of around 600 m2. This will create space for ten classrooms which will be able to house as many as 300 pupils. State schools in Nigeria charge a standard fee for each pupil, and this is something which many children cannot afford. However, under the intended private school model, children unable to pay these tuition charges will receive financial support in the form of donations from sponsors. This means that no child unable to pay a school fee will be turned away. As well as the construction of this new educational establishment, plans are also in place to build an orphanage for street children and a nursery school on the same site in Enugu. “Supporting a social project of this kind is a matter which is very close to our hearts,” said Thomas Willms, CEO of Deutsche Hospitality. “Our 1x1 donation project allows us to collect money for worthy causes. We are unbelievably proud that the monies raised have enabled us to assist with such a large number of great projects.” In December last year, Deutsche Hospitality entered into a long-term cooperation agreement with the Reiner Meutsch “FLY & HELP” Foundation. The aim of the organisation, which is chaired by its founder Reiner Meutsch, is to promote education in developing countries.
Array