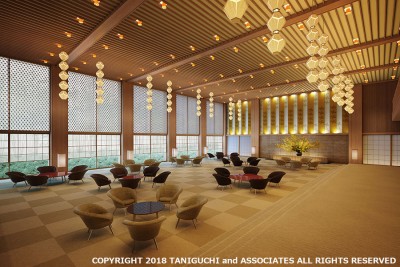 TOKYO, JAPAN, June 25, 2018 — Hotel Okura Co., Ltd. announced today the much-anticipated opening of The Okura Tokyo in early September of 2019, replacing the highly reputed but aging Hotel Okura Tokyo. The Okura Tokyo will reprise the former Hotel Okura Tokyo’s famed traditional Japanese beauty as well as its cherished simplicity and elegance to offer a new combination of “traditional luxury” and “contemporary luxury.” A total of 508 luxury rooms will be available in two buildings on the spacious central-Tokyo Okura property, about half of which will be covered with lush gardens and greenery. Advanced reservations for individuals will be accepted from April 2019; reservations for meetings, incentives, conferences and exhibitions will be possible from September 2018.

The smaller of the two buildings, The Okura Heritage Wing, which will have its own reception, will be a 75-meter, 17-story structure with refreshing views of gardens and greenery on three sides. The Wing will be a top-end luxury hotel with a tasteful, classically Japanese atmosphere. The beloved Yamazato Japanese restaurant will make its awaited return, as will the renowned Chosho-an tea ceremony room, making the Wing the perfect choice for special gatherings in elegant Japanese settings.

The larger Okura Prestige Tower will be a 188-meter, 41-story structure combining premium quality accented with refined Japanese aesthetics. Guest rooms will begin on the 28th floor, affording wonderful vistas of Tokyo from every room. The Tower will offer fine dining options and banquet facilities, including one of the largest ballrooms of any hotel in Tokyo to establish The Okura Tokyo immediately as a premier venue for prestigious international conferences.

“As Leonardo da Vinci said, simplicity is the ultimate sophistication. This is what we are trying to realize with The Okura Tokyo, a hotel designed on the philosophy of simplicity and elegance,” said Toshihiro Ogita, President of Hotel Okura. “It was sad to put our much-adored Hotel Okura Tokyo to rest, but I am fully confident that The Okura Tokyo will be equally loved by our worldwide guests and visitors. The Okura Tokyo will proudly offer the incomparable Japanese-style hospitality and other attributes that distinguished our original hotel, which we will combine with the highest standards of contemporary luxury to ensure that guests enjoy memorable, supremely comfortable stays.”

The Okura Museum of Art will also make its second coming on the property. Originally established in 1917 as Japan’s first privately operated art museum, it will once again attract art lovers from the world over with a celebrated collection that includes some 2,500 works of art, among which are three National Treasures, 13 Important Cultural Properties and 44 Important Art Objects designated by the Japanese government. The traditionally themed museum building will be one of the design elements comprising the property’s impressive new entrance, The Okura Square, which will also feature a large waterscape that reflects the changing seasons and times of day.

The original Hotel Okura Tokyo opened its doors in 1962 as a first-class hotel that was quickly prized worldwide for its traditional Japanese beauty combined with the very best accommodations, cuisine and service. Legacy decorations from the original hotel will grace the new lobby of The Okura Prestige Tower, including distinctive hexagonal Okura Lantern ceiling lights, lacquered tables and chairs arranged like plum flowers, the world map and clock displaying global time zones, and quietly elegant standing paper lamps.

A number of other decorations will be faithfully reproduced for the new lobby. These will include the Four Petal Flowers wall tapestry, a Nishijin-weave silk brocade originally designed by Japanese “human national treasure” Kenkichi Tomimoto, and shoji paper windows with the Asanoha-mon leaf-pattern lattice work.

In addition, the lobbies of The Okura Heritage Wing and The Okura Prestige Tower, The Okura Square, The Okura Salon, and selected restaurants and bars have been designed by Yoshio Taniguchi, celebrated architect of the redesigned Museum of Modern Art in New York and son of Yoshiro Taniguchi, designer of the Hotel Okura Tokyo’s famous lobby, a further nod to the Okura legacy.

“The original lobby designed by my father was extremely popular,” said Yoshio Taniguchi, “so I felt a special responsibility to create distinctive Japanese designs that would similarly inspire guests for years to come.”

The company also unveiled today The Okura Heritage Brand, a new brand that emphasizes traditional Japanese dignity and elegance, to complement its existing The Okura Prestige Brand. The Okura Tokyo will be the Okura family’s first “Two Brand, One Operation” hotel, a concept that the company will expand going forward. Further details are provided together with a rendering of The Okura Tokyo in a concept movie unveiled today.