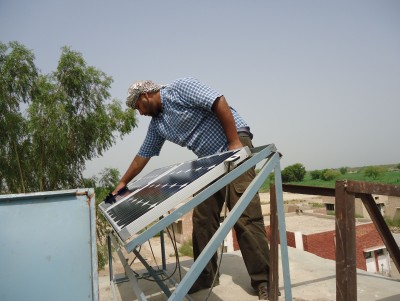 10,000 people in Asmant to the South-West of Cairo have been enjoying access to clean drinking water with effect from this month following a cooperative project between Deutsche Hospitality and the climate protection organisation atmosfair to set up a second self-sufficient water treatment plant in the Egyptian desert. The project has been financed using monies raised by the “Deutsche Hospitality 1x1” scheme, which donates €1 to charitable causes for every booking made via the Steigenberger and IntercityHotel websites.

Egypt is dominated by desert landscapes. Rain is a rarity across the whole of the country, and this means that water shortages are part of the daily struggles faced by the population. Poor drinking water quality is a further problem to contend with. Nevertheless, there are many small and medium-sized oases located to the West of the Nile which have led to the establishment of little villages. The usual practice adopted by people living in such locations is to obtain water from the mains or from a well and then allow it to pass through a special kind of clay vessel (known as a “zir”) for several hours. Although this process reduces the iron content of the water, it is unable to remove hazardous germs and other pathogens.
Having launched an initial water treatment plant in El Kefah, Deutsche Hospitality has now funded a second such facility in Asmant. So-called “SunMeetsWater” technology enables a decentralised location to be chosen. Photovoltaic modules on the roof of the plant mean that no external electricity source is needed and that no emissions are produced. The system also filters out all heavy metals and thus disinfects the water at the same time.

Up to 10,000 litres of water which meets the quality standards laid down by the World Health Organisation can be supplied every day. Plans are in place to introduce a card payment system in the near future in order to secure the long-term sustainability of the project. Each user of the plant will receive a prepay card which can be held against a reader when water is drawn. These revenues will enable maintenance and repair measures to be financed in future.

atmosfair is an experienced partner which is able to offer a strong local presence. It also collaborates with the “Research Institute for a Sustainable Environment” (RISE), a multi-disciplinary and not-for-profit organisation which forms part of the American University in Cairo.

atmosfair gGmbH is a not-for-profit climate organisation which was established in 2004. It focuses mainly on travel and operates in a proactive way to protect the environment via such measures as using renewable energies to compensate for greenhouse gases. The drinking water project in Egypt was developed by atmosfair on the basis of an initiative by Deutsche Hospitality. As well as being responsible for the project’s design concept and management, atmosfair is also conducting a study at each location to investigate climate effect and other influences on sustainable development produced by the plants.

ABOUT DEUTSCHE HOSPITALITY
Deutsche Hospitality brings together three separate hotel brands under a single umbrella. Steigenberger Hotels and Resorts has 60 hotels housed in historic traditional buildings and lively city residences and also offers health and beauty oases set at the very heart of nature. MAXX by Steigenberger – is a new and charismatic concept which places the focus on the essential in accordance with its motto “MAXXimize your stay”. Jaz in the City branded hotels reflect metropolitan lifestyle and draw upon the local music and cultural scene. And IntercityHotel offers more 40 upper mid-range urban hotels, all of which are located within easy walking distance of railway stations or airports. A further 30 hotels are currently at the development stage. This means that the Deutsche Hospitality portfolio currently encompasses a total of over 130 hotels on three continents.