CAESARS PALACE LAUNCHES DYNAMIC BRAND CAMPAIGN, LIKE A CAESAR, WITH SHARABLE VIDEO AND ROOM PACKAGE← Back 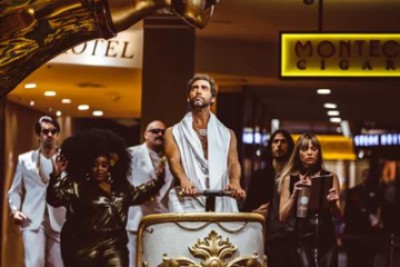 The iconic Caesars Palace Las Vegas has launched a dynamic new brand campaign with a fully integrated, sharable narrative video, sweepstakes and room package, showcasing how every guest who visits the reimagined resort is treated ‘Like a Caesar.’

The centerpiece of the campaign, the video showcases a character known as Caesar indulging in the resort’s world-class amenities, including the pool, nightlife, spa, dining, shopping and more. Building off the resort’s rich legacy of trailblazing innovation and opulent offerings in the center of the Las Vegas Strip, the film pays homage to the resort’s rich history while showcasing its distinctive experiences in an approachable and humorous way.
The ‘Like a Caesar’ campaign follows exciting developments at Caesars Palace. In 2017 the resort completed a full renovation of its Palace Tower, its largest tower, with stylishly designed guest rooms and suites. Earlier this year, the resort added to its culinary empire with the debut of the highly anticipated Gordon Ramsay’s HELL’S KITCHEN. Known for its Roman-inspired architecture, Caesars Palace is also home to superstar headliners at The Colosseum including Celine Dion, Rod Stewart and Elton John.
Created by i.d.e.a., a leading San Diego-based integrated marketing agency, the brand video uses the characterization of Caesar to showcase what a day in the life of any guest could look like. The video will be shared on YouTube and on various social media platforms beginning April 16, 2018.
Now through December 28, 2018, guests can live ‘Like a Caesar’ by indulging in a range of experiences and packages at Caesars Palace.

Rates start at $25,000 and package does not include tax, fees, or gratuity. To book, contact VIP Hospitality.

Additional resort experiences include a chariot photo opportunity in the main lobby; a specialty Roman Cocktail offered at various beverage outlets; a prix-fixe menu at Rao’s, MR CHOW, Old Homestead and the award-winning Bacchanal Buffet; and themed ‘Like a Caesar’ pool programming in the summer months, including DJs and visits by Caesar and Cleopatra.